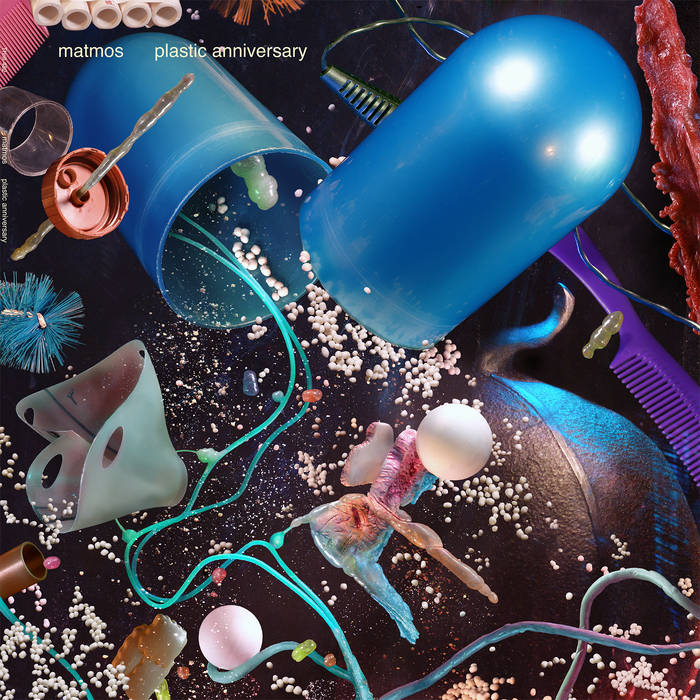 Jack Grimes One of the most engaging and unique albums I've heard in a while. Hit that buy button before I was five tracks in. Favorite track: Fanfare For Polyethylene Waste Containers.

hold-no-carter Matmos never fails to impress, either with their blinding creativity in sampling or their ability to create an inviting wonderland of sound, beckon you to come in, then punch you in the gut and kick you while you're down, but in a way that's good for the soul. Favorite track: The Crying Pill.

Thrill Jockey Records is pleased to announce Plastic Anniversary, the new album by Baltimore-based electronic duo Matmos. Pushing off from the restricted palette of their last album, the critically acclaimed Ultimate Care II, which was composed entirely from the sound of a washing machine, Plastic Anniversary is also derived from a single sound source: plastic.

At once hyper-familiar in its omnipresence and deeply inhuman in its measured-in-centuries longevity and endurance, plastic supplies, surrounds and scares. Seemingly negligible, plastic is always ready to hand but also always somewhat suspect, casting toxic shadows onto the everyday. True to form, the band have assembled a promiscuous array of examples of this sturdy-yet-ersatz family of materials: Bakelite dominos, Styrofoam coolers, polyethylene waste containers, PVC panpipes, pinpricks of bubble wrap, silicone gel breast implants and synthetic human fat.

Though it has the tight editing chops, pop forms and bizarre sound palette of their early albums such as Quasi-Objects and A Chance to Cut Is A Chance to Cure, Plastic Anniversary has a distinctive sound because of the foregrounding of plastic horns and plastic drums played by human beings. The bounce and snap of the duo’s programmed rhythms are here supplemented by a sweatier and more unruly human element provided by a surprising cast of guest musicians. Members of the horn and drumline sections of the Whitefish Highschool Bulldogs from Whitefish, Montana were recruited by Matmos and persuaded to take part in recording sessions at Snowghost Studios where they played objects sourced from a nearby recycling center, including massive plastic garbage bins. This was later combined with additional plastic percussion performances by Greg Saunier, a drummer known for his hyper-expressive, mercurial playing as a founding member of the band Deerhoof.

Taking the concept of “broken beat” literally, “Breaking Bread” is a bouncy digital dancehall number built entirely out of the plucked and twanged fragments of broken vinyl records by the Seventies soft rock group Bread. A mini-suite for plastic container, exercise ball and an amplified DNA kit that recalls both 80s pop and the hectic minimalism of Michael Nyman, “The Crying Pill” stacks frantic patterns of saxophone-like sobs onto deep sub bass stabs that are almost trap. Amplifying squishy synthetic human tissue created by the SynDaver corporation as a substitute for human corpses in medical schools, “Interior with Billiard Balls & Synthetic Fat” pairs squelchy electro made out of gross-out substances with tangy melodic riffs. This odd combination of Cronenbergian body-horror and sunny grooves continues on “Silicone Gel Implant”, a skanking number that works rubbery basslines out of, yes, a breast implant, but by the time the plastic flutes snake into the mix, the source becomes secondary to the trance-like form. Side one closes in a more reflective and somber key, with the title track “Plastic Anniversary”, whose cod-medieval martial drums and horn fanfares recall Matmos’ penchant for anachronism circa “The Civil War” before giving way to a close-mic-ed cascade of plastic poker chips.

If side one is playful and poppy, side two is sharper and darker in its implications, and features more live drumming than any other Matmos album. Things kick off with “Thermoplastic Riot Shield” a single-object study built entirely out of the sound of a police riot shield being stroked, rubbed and struck. The resulting sounds are processed into a tense assemblage of harsh noise, deep dub basslines and jarring cuts of silence. On a squeaky loop straight out of a Jacques Tati film, “The Singing Tube” draws out the pinging resonance of a ten foot long PVC pipe played entirely with plastic toilet brushes, and hits a flanged overtone effect not unlike the string compositions of Arnold Dreyblatt. Bristling with whistles and noisemakers and plastic-gloved handclaps, “Collapse of the Fourth Kingdom” bolts a percussive showcase for the high school marching band playing the signature patterns of drumline and Baltimore club onto jarring edits of LEGO bricks clicking into place and weird smears of processed plastic horns. Since plastic was described by its first developers as a “fourth kingdom” beyond animal, vegetable, and mineral, this track heralds the eventual collapse of the political economy that birthed the oceans of garbage that now choke our world. Thinking the dystopian consequences of plastic through to their post-human conclusion, the final track, “Plastisphere” sounds like a field recording of insects and birds and pattering rain and ocean waves, but is in fact a work of digital sleight of hand: every single sound on this track has been artificially constructed out of samples of bubble wrap, Velcro, plastic bags and straws and, tellingly, an emergency stretcher. After a volatile and vibrant suite of poppy plastic electronics, Plastic Anniversary ends in an acknowledgement of the planetary price yet to be paid.

Production Details:
Plastic Anniversary was pre-mastered by extreme digital sound artist Jeff Carey.
Mastered for vinyl by the renowned mastering engineer Rashad Becker.
Cover art, which collages high resolution, up-close photographs of the objects used to create the music, is by Ted Mineo, the creator of the cover art for Ultimate Care II.

Back cover image by photographer and activist Chris Jordan depicts the plastic contents from the stomach of a Laysan albatross photographed in an atoll near the Pacific Ocean Plastic Gyre.

Touring:
Matmos will be touring World Wide throughout 2019.

Anniversary:
Drew and Martin celebrated their 25th while making the album.